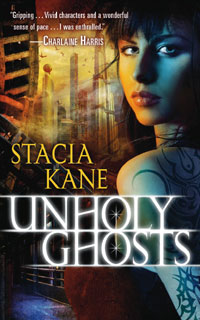 Unholy Ghosts is set in a world where the government has fallen, and the dead have risen and constantly attack humans. The Church of Real Truth promises to protect the living from the dead. Because the Church offers to reimburse those injured or harassed by the dead, people claim false hauntings to profit.

Chess Putnam, the main character of the series, is a witch and ghost hunter. She can detect lies, and knows which humans are actually being attacked and which are making it up for money. However, along with her immense talents, she must cope with the fact that she owes a drug dealer, named Bump, a great deal of money.

It would be possible to pay him back, so to speak, by unleashing a vicious group of the dead, but Chess Putnam must deal with her immense attraction to his boss as well as his rival gang leader. In addition, this job requires a human sacrifice and black magic. Is it worth it?
Read More...

Stacia Kane is the author of the Unholy series. She prefers the urban fantasy genre and she is in the process of writing the sixth book to the series. She tries to write every day and she says that common themes in her work are rejection, isolation, self-hatred, self-injury, and strength from within. In her words, "I don't write happy because I don't understand happy people."
Read More...

Retrieved from "https://unholyseries.fandom.com/wiki/Unholy_Series_Wiki?oldid=3987"
Community content is available under CC-BY-SA unless otherwise noted.